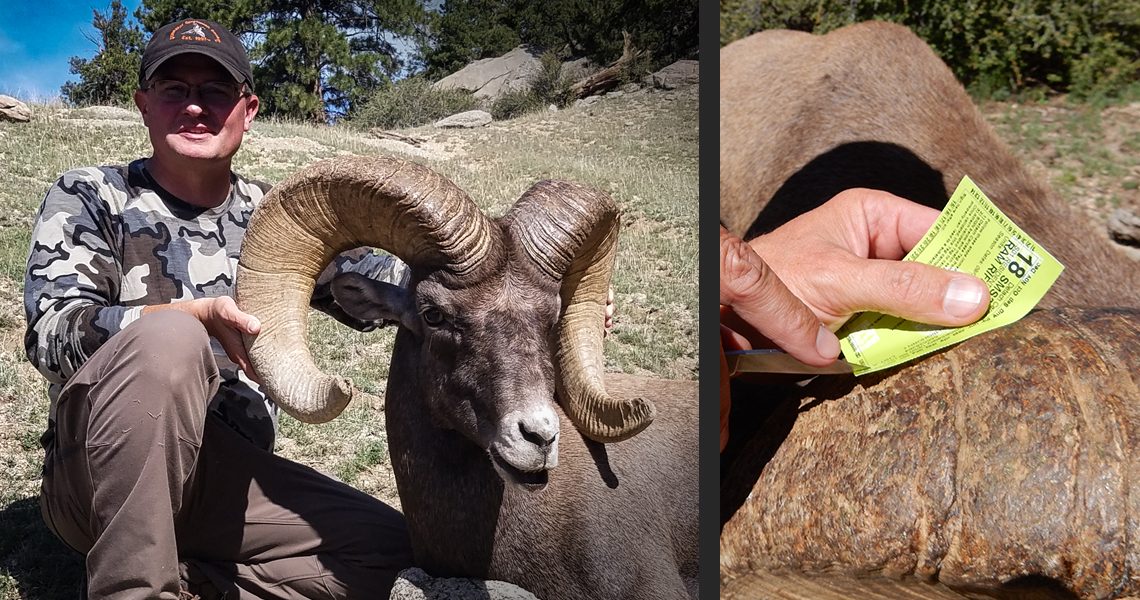 I glanced down at my watch and realized almost 15 minutes passed from the time I had gotten out of my chair to refill my water glass before heading upstairs to bed.  A few days prior, I received an envelope containing one of North America’s pinnacle limited licenses a hunter could ever hope to draw.  But there, lying on the kitchen island was a Colorado Resident Rocky Mountain Bighorn Sheep license, and I was reading every line word for word.  At the time, I was confused as to what I was doing.  How many times had I read the license before coming back to reality?  I welcomed the challenge, excitement, anticipation, and honestly, a little nervousness.

My spare time and thoughts were entirely consumed by all things sheep hunting.  Reading everything on my sheep unit, how to field judge rams, what to look for in a quality ram, what to be cautious of, studying maps, etc.  I contacted the local game warden and sheep biologist and they confirmed my research and stated the well-known areas.  I became a sheep hunting sponge trying to absorb every piece of bighorn sheep information I possibly could.

I was relatively familiar with the area because a substantial portion of the sheep unit overlaps units I have deer and elk hunted over the past 10 years.  I had seen sheep in certain locations and had a promising idea of where to start.  Yet, there were areas within the sheep unit I had never stepped foot in.

Five or six years ago, I was on an airline flight sitting next to a gentleman headed back to Colorado.  He noticed I was reading a hunting magazine and started our casual conversation.  By the end of the flight, he had shown me pictures of an extremely nice ram and provided the general location where the pictures were taken.  The historical Colorado Parks and Wildlife sheep harvest records confirmed no rams had been killed in this portion of the unit.  The harvest information coupled with a fortunate encounter on an evening airplane flight convinced me I needed to focus on this uncharted region, there had to be a nice ram in the area.

Knowing I had summer work obligations, family vacations, a two-week Alaska fishing trip, time was going to run out quickly. My heart told me I needed to be in the uncharted areas of the unit, yet my head told me to check out peaks and drainages where rams had been taken before.  Within the first ten days of drawing the tag, my oldest son and I made our first scouting trip.  Within the first three weeks, we found our first band of rams.  The best ram wasn’t a ram I was willing to punch my tag on, but exciting nonetheless and fun to share with my son.

Weekends were spent checking areas where sheep had either been sighted or killed in years past.  Some of these weekends were spent alone, some were spent with friends and family.  Some hikes were short and relatively non-strenuous, while others required hitting the trailhead before dawn and not walking into camp until well after sunset.  My wife and boys thought I was crazy when I’d tell them my hike from yesterday was over 20 miles long with over 6,000 ft of elevation gain and lost.  Maybe I was crazy, but it was my responsibility to ensure I found the correct ram.

One weekend my buddy, Dave, and I hiked into a drainage he found a deadhead ewe several years before.  Realizing we were going to have a few evening hours to do some glassing, I tossed out the idea of going to the southern part of the unit and glassing the “uncharted” mountain range.  Dave agreed, and we headed that way.

As the setting sun crept towards the horizon, Dave spoke up saying, “I think I see some sheep.”  He got me lined up on the rock and tree he was describing, I instantly picked them up, too.  It was sheep and they were rams!  They were over two miles away and we didn’t have much time to get to them.  We left that evening with a fuzzy picture of the rams, but we had found rams in uncharted territory.

Over the next month, I kept going back and looking for the rams, but they had simply disappeared.  It was almost as if they hadn’t even been there, it was a myth, simply gone.  One day while glassing for the rams, we were approached by a landowner.  He noticed us glassing and knew what we were looking for and kindly shared some information where the sheep might be hanging out.  For me though, my summer obligations kicked in and I’d be forced to wait a long six weeks until the next scouting trip.

Two weeks before the opener, I was able to get into the mountains again.  My anticipation was dampened when I couldn’t find the uncharted rams.  Another week passed, and I was going a little deeper this time.  Finally, bedded within the pines was a lone ram.  He was the best ram I’d spotted to-date.  Thursday afternoon before opening day, I went back to find the lone ram, but this time there were four rams and a possible fifth.  Three rams would make any sheep hunter happy, a beautiful almost full curl ram, a heavy-horned, broomed 3/4 curl ram and a yellow-horned 7/8 curl ram.  I’d found them at last!!!

Two days later, there was another 7/8 curl ram with the group bringing the total to seven rams.  To a novice sheep hunter, the dark-horned 7/8 ram was extremely heavy, carrying mass through his 2nd and 3rd quarters, wide horns that go up off the top of his head and swept below his jawline. Everything I’d learned about judging rams told me this was the ram I needed to kill.

Opening morning found myself, Dave and my good friend, Ted, hiking at daylight. From a mile away, we spotted three rams.  We couldn’t pick them up again through the pines and aspens as we got closer.  I had a feeling they were in a deep, narrow, grassy basin I’d seen them in days before, but it was hard to see into the upper portion this close.  Finally, after almost two hours of peeking and creeping around boulders and folds along the mountainside, there through a treetop was a feeding ram. 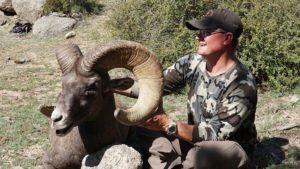 As I slipped around the boulder we had snuck up to, I quickly identified my target ram laying with two other rams.  They caught movement, stood up and lined out in single file walking straight away.  This gave me a chance to move to another boulder, get my pack set up, and settled into a decent shooting position.  I never took my eyes, or crosshairs, off the ram for fear of shooting the wrong one.  The first four rams jumped up on a boulder giving me a perfect broadside shot while filing into the pines, yet my ram and two others decided to stop and started grazing again.  Suddenly, the four rams bolted back down the mountain causing all the rams to huddle together.  Behind my ram, stood a banana-horned ram.  I asked what the range was, with Dave responding “214”.  We discussed I was locked on the correct ram, we just needed the banana ram to move. 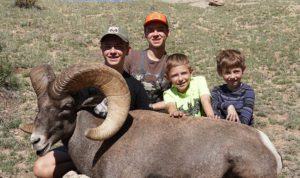 I was nervous as the crosshairs danced a little, but steady enough they never left the kill zone.  At the shot, I was on the point of his shoulder with him quartering towards me.  I saw him throw his head back as he absorbed the bullet.  The other rams scattered to the right.  As I was working the bolt, I saw him take three to four hops forward. I was trying to locate him again when his hind legs tumbled through the scope.  He rolled a couple yards downhill coming to rest behind a boulder and some bushes.  In a matter of seconds, my four-month sheep hunt was over within the first few hours of opening morning.  I had looked at almost 20 rams, walked numerous miles, lost over 20 pounds and spent the better part of my summer sleeping in a tent.  Colorado isn’t known for producing large bighorns; however, this ram certainly is. 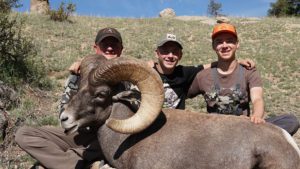 I’m very appreciative to my family and friends.  To my friends who helped me scout and gave me support Dave, Cody, Eric, Curtis, Ted, Tricia, Chad, Hannah, Scott and Todd, thanks for being there for me. To my wife, Holly, and sons, Case and Cole, I’ll forever cherish the love and support you give me daily.  A text message I received sums up my bighorn sheep quest in uncharted territory, “That feeling is exactly why we do what we do.  If something didn’t get a guy that pumped up, it wouldn’t be worth the expense and effort we put into it.  It’s why people like us find each other. So proud of ya buddy. Lifetime achievement accomplished.”

PrevPreviousNo Hounds? No problem!
NextThe Moose is Loose!Next
Back to Blog