The Moose is Loose! 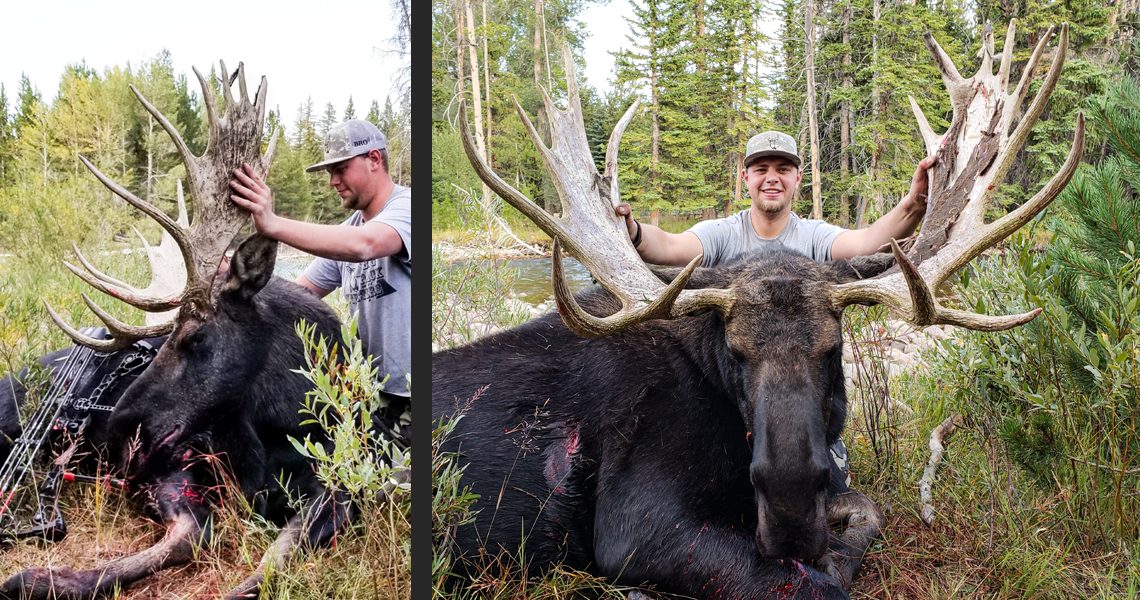 The Moose is Loose!

I was coming off of a graveyard shift at my job.  On this particular day off, I couldn’t sleep so of course I was at Wilde Arrow Archery (my go -to archery shop) killing time and trying to take my mind off draw results. Every once in a blue moon you’ll draw what you’ve been hoping for. Anyway, 10AM time to check the results…a moose tag! I refreshed my phone and wiped it off because it had to be a mistake, with only 12 points. I looked again… It was a moose tag!!!

This was my best draw to date. Keep in mind this is May, opening day wasn’t until September. With this being said, I knew that with every good tag big changes were bound to happen. Mine happened to be a big work promotion requiring me to move, a shift change and much different work schedule. Fortunately, I planned it to where I had a month off at the time of my hunt.  Let’s just say my summer was the longest, most anxious, hardest working, unnecessarily preparing, and exciting summer I’ve had. I certainly didn’t think, come hunting season, I would get lucky enough to get anything to write home about due to only having one big bull on the hit list, whom I hadn’t seen in over a month, but dammit I was going to give it my all. Side note; It’s sort of a well known fact that when you get the draw of your dreams, nothing , and I mean NOTHING, goes as planned. Here’s to hoping that all my fellow hunters (new, experienced and pros) can all relate so far.

Sept 1st landed me in a well known drainage in my area. I was extremely happy, humbled and fortunate just to be able to take a month off and give it all I had with my life long hunting partner and the man who started my passion, My 71 year old grandpa. But I was also a bit discouraged right off the bat, due to my scouting report. The cow to bull ratio seemed to be a healthy 2-1. The bulls I constantly envisioned seeing and praying would be out there… just weren’t. Not one.

As anxious as I was, there is nothing like that first fall crisp morning. The sun isn’t quite up. The echo of my grandpa’s famous words, “get them damn training wheels off that bow” (he is an avid traditional bowhunter). I’m packed with all my favorite snacks. It’s so quiet, yet so loud with the sounds of leaves crunching beneath boots, nearby river… okay, now I’m writing a country song. Sorry, back to my story.

Many miles later and no bulls to get my blood going, it was now day four. I was doubting the area I had chosen. I felt as though I had covered every square inch within 20 miles. My mind started to drift to getting a nice elk, they were everywhere! At least then I’d have something to take home this year. I would have to remind myself how few and far between these moose tags are. Day 5 I was up before the sun as usual, feeling hopeful and around noon  I was hungry, exhausted and ready for a nap.  So I waddled back to camp. Everything that could have went wrong, did. As I entered camp I noticed a flat tire on my UTV, on top of that I had also left my range finder somewhere up on the mountain. With no other choice I hitched up and figured I’d race back and grab the necessities (like I said in the beginning, when you get that kind of draw, stuff just happens). So, I made a decision to go home for the night.

Regroup, get some solid rest and get back at it the next day.

As I was pulling into the driveway I got a tip on a pretty decent size moose. Now, let me also hurry and tell you, 99% of hunters/fisherman/most men in general tend to exaggerate. Shocking, I know. I sat there for a minute or two knowing that if I didn’t at least check out this tip I’d just obsess about it until I came back up anyway. “You will miss 100% of the shots you don’t take.”

A few hours into my hike, I was walking alongside a river and in a sea of willows I spotted them…white paddles! Instantly I knew this was the bull I wanted, NO ONE would believe I even got to see it. I took a minute to just stare at this beautiful animal, he was massive.

The stalk landed me about 15 yards away with no chance of a shot. What felt like an eternity, he slowly started to rise up and out of his bed. He then began to scrape velvet off on one of the nearby willows. As he lazily walked out of his thick safe haven, I knew he could sense me. He froze at the edge of my shooting lane which would put him at 30 yards. I knew this was my shot. Even after years and years of hunting I can humbly say I am a decent shot but man, I gotta tell ya, that 30 yard chip shot felt like a 100 yard blindfold gamble. Just when I saw him start to relax a bit, so did I. I drew back, settled the 30 yard pin on his front left shoulder, and as soon as I hit my anchor spot, I tapped the release. I heard the famous WALLOP of my arrow making contact. He instantly ran back behind one of his willows. My first thought was, did I just make a leg shot? I sprinted to get a better look, and hoping I’d get a second chance. To my utter surprise and disbelief, he had already expired. Ten steps from where my arrow hit!

A flood of emotion hit me, hard. I just circled him shaking my head. This was a moose I would have been content to just get a photo of. I’d never even dreamt of a bull of this caliber in a unit such as this one. It was the ultimate “hunters high.” I couldn’t quite grasp what had happened. Every long day of scouting and not even seeing a jackrabbit, every exhausting day at work, every missed shot and every time I would doubt my skill or work ethic… It was all instantly worth it.

After a few quick phone calls (I’m sure not one person believed what I was frantically saying) within a couple of hours the moose was out. Thanks to my incredible circle of family and friends. I want to be clear to anyone reading this, whether you’re young and just getting into this sport or have been going at it for quite some time and haven’t had your hunting story yet, I believe we create our own luck. By that I believe luck is when the perfect opportunity meets skill at the exact same moment. Work hard, practice, and enjoy it. Even on days I don’t reach for an arrow, because it’s just not my day. I still crave being out in nature, grounding me mentally and spiritually. I will still always look forward to my next hunting adventure.