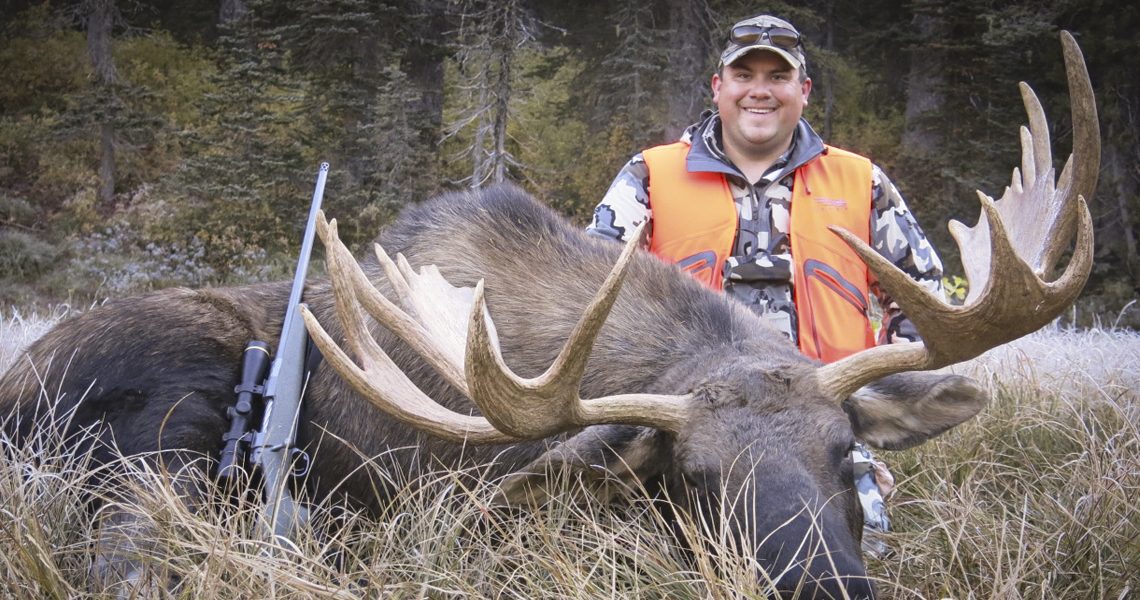 My kids laughed at me hysterically. The dance they named the moose tag dance I had developed after checking my Montana draw status and finding “successful” was more than they could handle. I have applied for this moose hunt for 22 years and successfully guided my dad to a great moose in 2015 in the same unit. Fast forwarding through a busy farm season and the anticipation was getting to all of us. My wife Jenny kept laughing at moose grunts I kept practicing. Our eight year old son Paxton was inviting his friends to go moose hunting and our six year old son Sam kept saying that he could carry a whole quarter himself. Our three year old Laura kept asking what a moose was. My hunting partner Kyle asked me what I was looking for in a bull and I said “a bull with multiple browtines and width over 40.”  He told me good luck and it would happen.

I finally got to break free from the farm for a few days. It was mid-September and fall was coming on strong and I knew the rut would be cranking up. Unfortunately, my sons had school so I went to the moose unit for a couple days of hunting but I told them unless I saw a brute I would be back to get them for the weekend hunt. They agreed but said, “dad we hope you find a big one.”

The first day of the hunt was fun seeing cows and calves at the lakes in the unit. The next morning I hiked into a new lake and found a ton of fresh moose sign. I called sparingly hoping to get some reactions to no avail. I checked a few more creek drainages and lakes that day finding more cows and calves but again no bulls. I called home that night and spoke with Jenny about the lake and all the moose sign I had seen. I told her that I was planning on hunting the backside of the lake in the morning and if I didn’t see any bulls I would come out in the afternoon and come home for a few days to attend to some farm work and wait for the weekend with the kids to hunt.

The third day of the hunt started with hoarfrost on everything at the upper elevation of the unit. The hike into the backside of the lake was uneventful. I got into calling position on a large meadow I had found adjacent to the moose hole. I began to call lightly with a couple of cow calls over a fifteen minute period. I started another call sequence and added in a pair of bull grunts. After the second grunt I heard a response grunt behind me on the backside of the meadow. I stayed quiet for a minute and the bull grunted again, as he did I grunted over the top of him. He let out a huff as if to say “it’s on buddy” and I heard crashing as he ran to the edge of the meadow. He stopped to thrash a bush at the edge of the clearing and came storming out into the open looking for a fight.

I got a great look at his width and multiple browtines and stopped looking at his headgear and focused on getting a good shot on him. The meadow had an abundance of small ponds and because I was by myself I was trying to make sure he would tip over on a dry patch.  He cleared a small pond and went broadside. I made a nice double lung shot and he attempted to bolt back to where he had come from. I shot him twice more thru the lungs and luckily he tipped over on a dry mound. I was so excited and relieved to get a great bull and the excitement only increased when I got a chance to check him out further. He had 19 scorable points and a width of over 44 inches; he was exactly what I had hoped for.

After pictures I began breaking the bull down and getting him into game bags. I moved the game bags and the head and hide away from the carcass to the far end meadow due to the grizzly population in the area. I started the pack out and had it completed six hours later. It was a mile to the truck and when I dropped the head and hide in the truck on the last load, I was tired and happy.

This hunt was so rewarding and worthy of the 22 years of anticipation. My wife and kids were very excited when I got home the next afternoon. I told both of my sons that when they finally draw this moose tag they will understand the excitement. I will be there to help call and make more memories in this area our family loves.