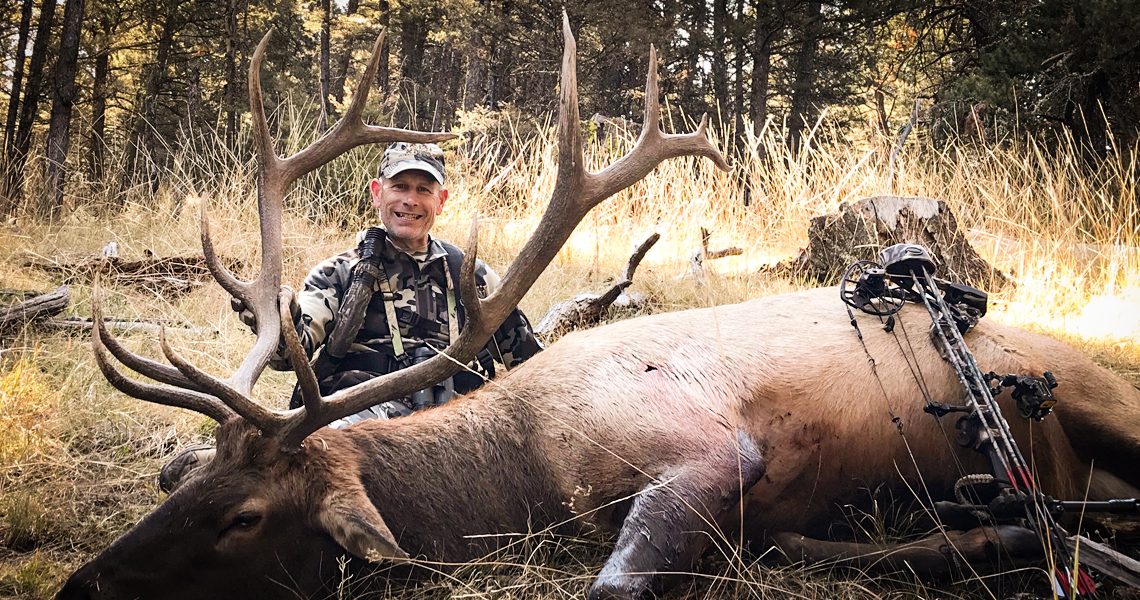 The bull bugled right over Skrawny’s cow call. I cow called and he bugled again! If he was as big as he sounded we were about to have a close encounter of the 6 x 6 kind.

I was archery elk hunting with Bear Track Outfitters out of Buffalo, Wyoming. Skrawny (Kelly Camino) was my guide and longtime friend. Having hunted this area his whole life he is very knowledgeable about how the elk live in this rugged sagebrush, deep canyons and timbered ridge country.  The ranch we were on was loaded with elk and had not been bow hunted in several years.

Our first three days had been action packed with several close calls. Herd bulls were gathering cows and chasing off satellite bulls. While sitting on a wallow, I had several rag horn bulls at point blank range. The evening of the third day, Skrawny was glassing a big herd from a ridge overlooking the sagebrush. I was sneaking along an old logging trail in the timber. Softly cow calling, bulls started bugling all around me. I quickly set up and nocked an arrow. The bull with the most aggressive growl and bugle was going to walk right in front of me! I stopped him with a cow call at eight feet. He was a heavy 5 x 6 with a huge body. He stood there looking through me for what seemed like five minutes. I was holding out for a big 6 x 6 and let him walk away. I remember thinking, I hope I don’t regret that move!

That night in camp, we discussed the plan for the morning hunt. When we finished we had a very good feeling about day four.  At first light, we watched a big 6 x 6 bull with his cows move into the timber above Otter Creek. A few hundred yards west of the herd, a couple of 6 x 6 satellite bulls disappeared into the timber as well.  With the wind out of the southeast we moved west of the herd. We dropped down into Otter Creek and climbed up into the timber. This put us downwind of the elk.

We had set up in a small park-like area with scattered pines when our cow calls fired up the big bull.  Skrawny’s inviting cow calls had him bugling non-stop and coming fast! An arrow nocked, I came to full draw when I saw him coming through the timber. His huge rack was busting branches and making all kinds of noise as he closed the distance.

He was bugling at 10 yards when I watched my arrow disappear into his vitals. The big bodied bull whirled around and ran 40 yards when Skrawny’s cow call stopped him in a perfect shooting lane. Already at full draw, I buried the second arrow into his front shoulder on the opposite side of the first arrow.

I watched the bull go crashing through the timber and then there was dead silence.  He was down! I turned around and Skrawny was running towards me grinning from ear to ear. The next few minutes were spent high fiving and reliving what had just happened.

We found the big 6 x 7 only 75 yards away and gave thanks to the Lord for allowing us to harvest such a fine bull elk.