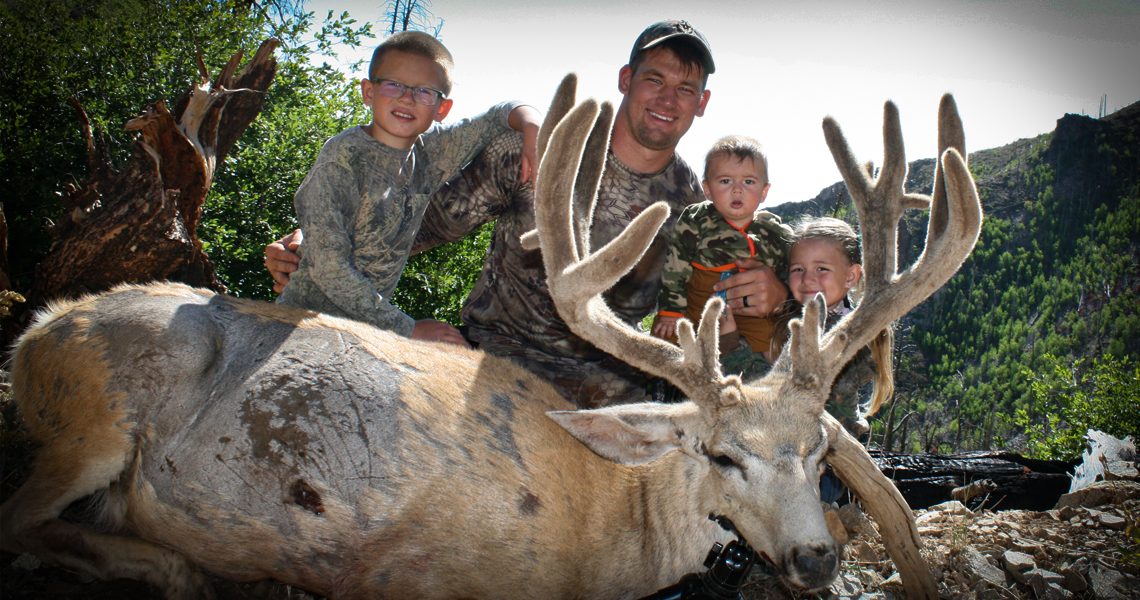 Outside of Delta, Utah on my way to Dry Lake, Nevada to gather our families cattle off of winter range my wife was checking emails and came across the news that I drew the premium limited entry tag for the Henry Mountains. I thought she was messing with me because I only had four points which gave me a 0.48% chance of drawing. After seeing for myself I cried. Yes, I cried.

From that moment on every thought on was planning this amazing hunt. Every week, after my 48 hours at the fire station, I would go up and scout for four days. It was on the first scouting trip that I fell in love with the triple eye guard buck I named “Stockton” after John Stockton “the triple threat”.

Over the next month and a half I saw bigger, higher scoring bucks but I would always come back to the first buck that caught my eye. I decided this was a buck I was going for opening morning.

The majority of the people I would run into during scouting were guide services. From the beginning I knew that I wanted to do this hunt myself. Something about the hard work and dedication of a DIY hunt is why I archery hunt. Two days before opening morning I had my wife, kids, and two of my good friends come up. I knew where Stockton would be so we left him alone for two days.

Opening morning we parked the side by side at the base of the canyon and waited for three hours until daylight. When the sun came up we headed up an old road and if he was where he had been, the deer would be at the top of this canyon. As we were approaching the hill side we found him 55 yards from the trail bedded down. I snuck up the side hill and waited for the buck to stand up out of his bed.

A thunderstorm rolled in and dumped on me for 45 minutes. I was actually grateful for the rain because it settled my nerves and allowed me to think about the shot before he stood up. When he stood up at 55 yards he was facing me so I didn’t have a clean shot. I drew my bow back and anchored in, waiting for him to turn broadside. He turned broadside but took a step up the hill side out of my shooting lane.  As he worked towards another shooting lane at 45 yards I got impatient and decided to sneak down the trail where I could see him. Wrong decision. I headed back up the trail where I originally was. I waited for what seemed like forever for him to come back into my sights.

Rocks began to slide to the side of me and another 4×4 was headed towards me and had me pinned. As I held there the bucks began to feed again and Stockton was in my sights at 50 yards. I knew I had to take the shot before the other buck startled him. I let the Sevr broadhead fly. It was a good clean shot. The buck went up the hill 20 yards and bedded down. I sent my buddy to camp to get my wife and children who were hoping to be there for this moment while we let the buck die.

As I walked up to the buck I was shocked at the mass he had. I knew he was stocky but it seemed to grow the closer I got to him. Hunting is my passion and being able to do it with my son by my side while the rest watched through the spotting scope is what it is all about. We got him back to camp and within minutes the fish and game were there taking pictures with us and one by one more and more hunters began to show up congratulating me on the first Henry Mountains archery deer of the season.

PrevPreviousThe Moose Dance
NextSo Many Hunts, So Little TimeNext
Back to Blog