So Many Hunts, So Little Time 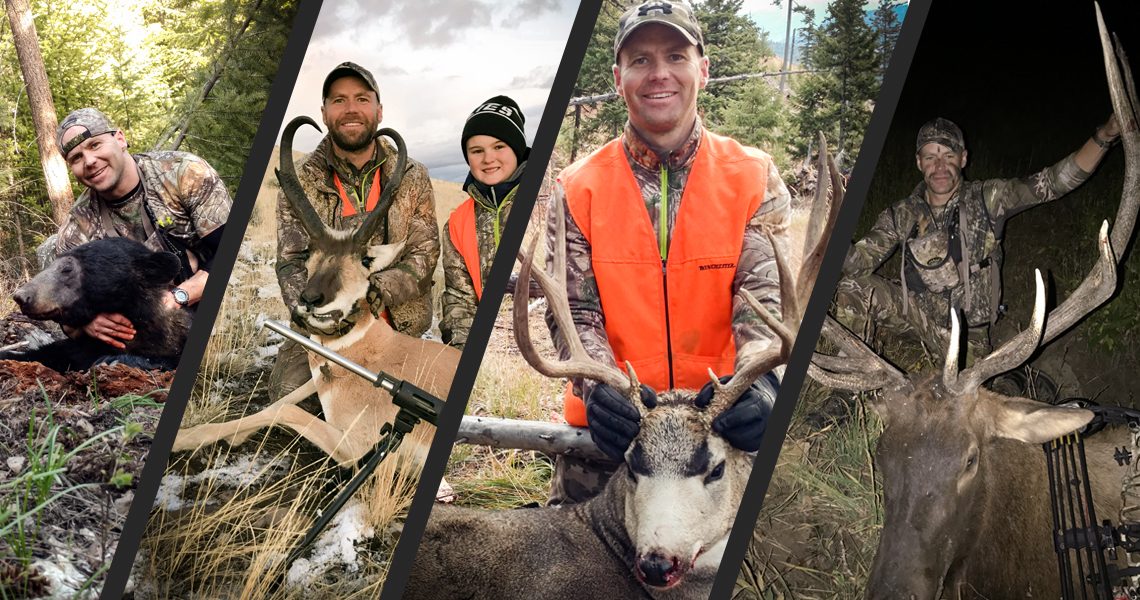 So Many Hunts, So Little Time

This year I turned 40 and it hit me pretty hard. It wasn’t that I was unhappy with being a year older, it’s just that I love my life and where I am in life, so every birthday is a reminder of just how quickly time goes by. My birthday was only a couple days before archery season opener. I waited impatiently through weeks of coworkers and friends constantly reminding me that I was about to be over the hill. So when the season opened I couldn’t wait to get out.

I’ve hunted my whole life but have not had much luck putting tags on”the big ones.” Hunting elk has always been my biggest struggle, both in success and opportunities. It wasn’t until my now good friend Kevin moved to Montana and we started hunting together that my luck began to change. He made me realize I needed to change my strategies by hunting harder and hiking farther than I ever imagined I could. I now train year round just to be able to keep up with him.

I arrived into camp late at night a couple of days into the start of archery season. I pulled into base camp just as Kevin arrived back in camp from hunting all day and having some close calls. With the late night, we woke up late and got our gear ready to hike the six miles into our hunting area. After four hours of hiking,  we arrived at spike camp, had lunch and a cup of coffee to re-energize.

We started the steep ascent from camp and within a hundred yards I had a painfully sharp seed stuck in my eye. Kevin spent ten minutes trying to get it out only to lose track of it. I felt like it was now behind my eye but since we couldn’t find it and I could see, we continued up the mountain. Once we reach the top I let out a locator bugle and immediately got a response in the far distance. We took off in that direction of the bull and he continued to bugle letting us know of his location in the bottom. Once we were within what we guessed to be 400 yards, Kevin being to great guy he is, insisted that I set up first. I reached the edge of the timber at a large open park and Kevin began calling. The bull would occasionally respond with non aggressive bugles as they climbed up the mountain to my left. I could tell I was not in the right spot for a good set up so I made a quick dash across a field of dead junipers and set up again just in time for the bull to come into view about 120 yards away. He would occasionally look in Kevin’s direction but showed no interest in coming closer. I had no way to get closer and figured there was no chance of making it happen so I just sat back and enjoyed the show, watching him bugling and looking over his cows. After several minutes he began to walk, quartering away.  Just when I thought it was over I noticed his head was covered up by an old, dead juniper tree halfway between us. I decided to see if I could close the distance by walking straight at him and keeping the tree directly in his line of sight of me. He would occasionally look back but could not see me. I could not believe I made it to the tree without spooking him, but he disappeared from view under the steep ridge. After a couple of minutes, Kevin bugled again and that spiked his curiosity once more. He came back into view, this time at 70 yards. I knew I could make that shot so I began drawing back. He noticed movement as I came to full draw and stood broadside staring in my direction. I settled the pin and released. I will never forget the sight of my arrow flying in his direction and disappearing into his chest.

I walked back to Kevin in complete disbelief and just as I got up to Kevin, my eye began to water heavily and out came the seed. We waited an hour and began the search. After 150 yards we found him in a ravine and emotions ran all the words out of my mouth.

The next 28 hours were the hardest of my life. We finished quartering the bull at 1:00AM and didn’t arrive back at base camp with the first load until 8:00 am that morning. We slept for two hours and started all over again,  finishing the pack out that night at 11:00PM.

A couple of weeks later and four toe nails less, antelope season began. Kevin and I  were lucky enough to each draw a couple of antelope tags. We returned to my favorite antelope country and were immediately surrounded by herds of speed goats. We quickly filled our doe tags and by the second day Kevin was tagged out on his first antelope buck. I had my heart set on an above average buck, nothing spectacular, just something that would look good on the wall. The weather quickly turned cold with a heavy snow storm blowing through. As we drove the side by side up to a large plateau the sun began to peak through the clouds. As we glassed across into the distance I looked down the ravine below and noticed what looked like a great buck scraping and raking a sagebrush about a 1000 yards down. With the sun directly at our backs, I decided to go straight at him. We got to within 500 yards when he decided to lay down, facing into the steep hillside. I couldn’t believe it as antelope always want the most visibility no matter what they are doing. We continued closing the distance and once we got to 300 yards I got set up to wait for him to stand. I decided to get his attention to stand him up so we began whistling at him which did nothing. Then we tried a distress call and still nothing. Even after we tried yelling at him, the biggest response we could get from him is a slight head turn so I decided to take the shot, sending the bullet perfectly to him. He only got bigger as we got up to him and for the second time this hunting season I had a true Montana trophy down.

Deer season quickly came and I was all too anxious to get back on the mountains. Once I did, the mule deer rut was in full swing and there was no shortage of deer. I climbed high and watched several small bucks chasing the does but nothing I was ready to punch tag for. I kept hiking and enjoyed seeing the deer chasing each other all over the mountain. After spending a couple of the days looking over smaller bucks,  I was beginning to think maybe this area did not hold any mature bucks. I was hiking along a thick patch of timber when I came to a small opening that I could glass down into a little park. I immediately  noticed a lone deer with his head down feeding. It was difficult to tell how big he was with all the brush in the way. I watched him for several minutes and was going to let him go but I decided this would make for a great opportunity to focus on getting my twelve year old son get his first mule deer so I took the shot. I saw him briefly as he ran away and I got the impression that I had hit him right in the front shoulder. I hiked down to where he was feeding to look for blood and found no sign of a hit. Spending the next 90 minutes searching every inch of ground in the area and finding nothing,  I was beginning to think I missed as I could not imagine an animal not leaving a blood trail after getting hit with a 300 RUM. I decided to take one the last look for him by walking along the path I thought a wounded deer would take. I found him,  only 70 yards from where he was hit. He fell into a patch of down fall, blocking him from sight. Once again he only got bigger as I walked up to him. I was beyond excited as I had punched my tag on an animal bigger than I could have expected and a great way to end the fall hunting season.

After the long Northwest Montana winters, I always find myself counting down the days until bear season. I love hunting bears and I’m not sure if it’s the bears themselves that gets me so excited or just the opportunity to be in the mountains in springtime. My first opportunity to get out,  I hiked into an area I’ve always thought looked great for bears but never had a chance to explore much. I climbed up to a high bench overlooking the entire canyon. I sat down to eat lunch and to glass the open parks across the canyon, which then turned into a nap. I spent a few hours doing all three when I noticed a large black dot nearly mile away. He looked like a great bear but I had to get a closer look. I charged down the mountain and across the canyon. After close to an hour of hiking,  I came to the old logging road he was heading up. I figured he would be a long ways up the road by the time I made it across but I approached the last spot I had seen him cautiously. After walking as quietly as I could for several hundred yards up the road, I came around a corner and found him with his head in the green grass about forty yards in front of me. He looked like a massive bowling ball. There was no second guessing this bear as he was easily the biggest bear I have seen out hunting. I shot and watched him roll down the hill into a steep ravine. I could not believe it was over on the first day. It was bittersweet as I love spending most of my spring in the mountains. I once again punched my tag on a great and beautiful trophy for my wall. He was the biggest bear I’ve ever seen in the wild and had a unique bald face aged with scars. I have always wondered if hunters on TV are exaggerating when the struggle to hold up a black bear’s head. I now know what that’s like as I struggled to get my arms around his neck just to hold him up for photos.

I could not believe my 40 year luck and only hope it continues and maybe even improves with age!  Just because I’m over the hill doesn’t mean I can’t keep climbing.