No Hounds? No problem! 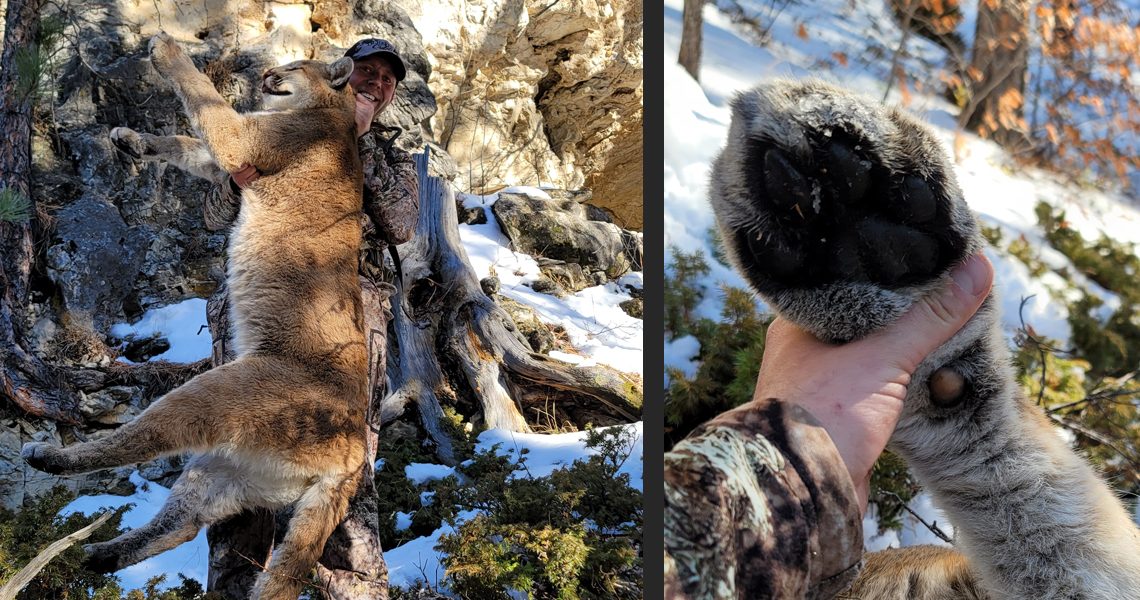 No Hounds? No problem!

South Dakota has had a mountain lion season going on 10 years now. One of the things that makes this hunt great is that it is a one on one challenge. While there is a very limited hound hunt available in a small area of Custer State Park, all of the rest of the Black Hills is purely man vs. cat. In the particular area where my hunting partner Tyler Hoffman and I hunt, the National Forest trails are barricaded and motor vehicle use is not allowed. Many hunters use their trucks or an ATV to drive open trials for miles to cut fresh tracks then get out and hunt the tracks with fresh legs. We choose to hunt the area that is closed to all vehicle traffic. Usually arriving before daylight, we grab our packs and guns and start hiking up the mountain hoping for that elusive fresh track and the hunt that will follow. Many days, we have 10 miles on our legs before we cut tracks, and have to make the decision if we are going to be able to cut the tracks, or have to call it a day and head back to the truck.

This year, we have been blessed with having numerous mountain lions in our hunting area, and have been able to cut numerous tracks on a given day, but this hunt is daunting, 99% does not get us a cat, the hunt must be 100% to be successful.

Three weeks before harvesting this cat, we had tracked a nice tom in fresh snow into a small den he was sleeping in. When I noticed the cat tracks going in, I whispered to Tyler, at that same time the cat put its head up and looked me in the face a mere six feet away. One hop over the rock, and the cat was gone. We pursued the tom for about 15 miles over ridges and through ravines, until calling it a day when our legs could take no more.

Fast forward three weeks, we got a fresh snow on a Sunday, my father was in town and we were processing our deer meat from another successful deer season. I wasn’t going to bail on him, so the fresh powder needed to wait a day. On Monday, I went out solo, about three miles in, at an area we call the boneyard where we have found numerous lion kills, I found tracks from Sunday that I did not recognize. Knowing a cat was in the area, I decided to cut across country and see if I could cut tracks across a mountain side. The plan worked, one more mile, and I cut brand new tracks from that morning, after tracking for an hour and looking at my onX track, I realized the cat’s general direction and quickly recognized what ravine it was headed to.

Sure enough, the cat crossed a Forest Service trail and went right into a horrible ravine that we had sworn we would never enter. I decided to call for 30 minutes above the trail, on the Fox Pro call, I tried cottontail, woodpecker, mountain lion in heat and mountain lion whistle calls to no avail. I walked down and grabbed my call. Deciding to walk 50 yards down the trail, I noticed brand new tracks that could not be more than 15 minutes old, the weather was warm, about 55 degrees and old tracks are quickly melted and washed out. The cat had circled me, and the hunt was back on.

Sneaking through the trees, I found a rock face about 60 yards in, approaching the rock face, the cat walked out from its sleeping area just 20 feet under me. Grabbing my gun in a hurry, I drew and my scope cover wouldn’t open. One hop and the cat was gone. Within 20 feet of a cat twice in a few weeks and not getting a shot off, had me absolutely defeated. I circled the area and realized the cat did not sprint out and totally exit the area. I still had hope for the next day.

The next morning, Tuesday, the snow was frozen and had a hard crust from that night’s freeze.  I delayed my hunt until 10 a.m. so the snow would melt and knock down my sound. Three miles from the truck I found the cat’s track down the road in my boot prints from the previous day. I knew I had a shot. 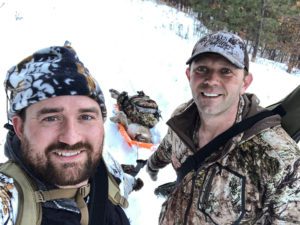 Sure enough, the cat went to the same ravine as the previous day. I decided that absolute stealth was the only way. I dropped my pack and all gear I did not absolutely need and cut the tracks. I followed the cat for over a mile into the steep ravine. Stopping at one point, I realized the cat was headed to the same den that it had come out of the previous day. Little did I know, but at that moment, the cat was a mere 10 yards below me sitting under a rock ledge. I quietly snuck forward working my way out of the ravine to the main trail, to sneak around to the opposite ridge and see if the cat was sleeping, this time hoping to not have a mistake on the order of the previous day. 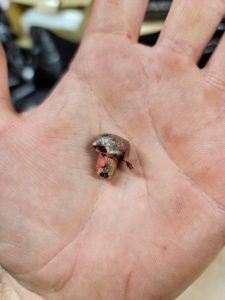 Arriving there, the cat was not in the same den. I decided to work the ridge and see if it was somewhere along there. I quickly realized that my height advantage gave me a great view of the opposite ridge where I just was. I could see my boot prints through the binoculars, I could see the cat prints I was following. As I followed my previous path, I suddenly saw where the cat had just been sitting under me. I followed the tracks through my binoculars, and there she was. Sitting on a downed tree, broadside, looking right at me. I quickly grabbed my gun. Mistake. The cat saw the sudden movement and jumped off the tree stump. No way I had just seen another cat and didn’t get a shot.

I gathered myself and began to glass. After 45 minutes I picked up the new tracks through the glass, followed them to where the cat had been sitting under me just hours prior. Then the cat lifted its face between two trees and stared at me 150 yards away. No mistakes this time, I froze, took note of what trees it was behind, lowered my binoculars, and crept to the cliff face. Lying prone I put the cross hairs on the cat’s nose, it knew something was wrong, it lowered its ears and I pulled the trigger. A huge boom echoed into the canyon as the cat leapt into the air and tumbled down the ravine. The cat gathered itself and took off on a dead run out of sight.  Wounded? Missed? I did not know. 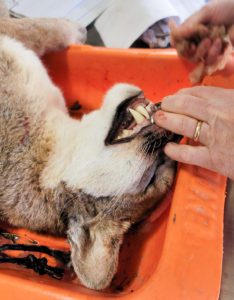 I traveled to where the cat was shot and found the blood trail and the small avalanche of snow caused by the cat jumping. I followed the cat for 300 yards before I found where it had been in a den, seeing blood, I scanned and there it was, expired in a pine bush on the edge of the ravine.  Calling my hunting partner Tyler who was working, I told him the news. He got the sled, and plenty of water and hiked in to help with the haul out. The terrain was horrible, steep uphill and sloping fast to our right, we loaded the cat into my Mystery Ranch Sawtooth 45 and hiked out. Tyler behind me, making sure if I fell he would throw me to the rock side and not slide down the ravine with the cat on my back. Four hours later we were at the truck, smiling and happy that we finally connected on the most difficult hunt in North America, in my opinion.

100 percent fair chase public land, all boots, no vehicles. The way Eastmans’ have taught so many of us is the right way.