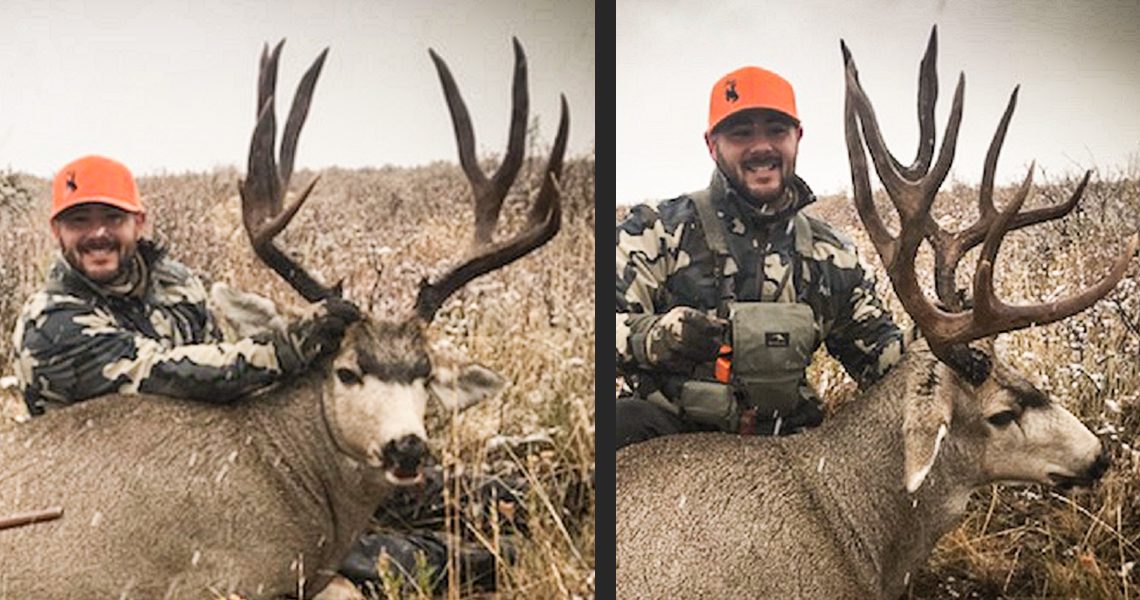 Prior to my hunting season, I began preparation the same as every year, lots of gym time “cardio” and reps of shooting my bow. With the season starting in September for archery, and not drawing any special areas for deer, I had one goal in mind. To find a mature trophy mule deer with an OTC general tag. With preparation, persistence and hard work, I was determined to fulfill that goal.

During archery season, I had a few close calls with mature bucks, which ended in blown stalks. Passed on several respectable bucks, that in the years past, I wouldn’t have even second guessed myself about passing up on a general over the counter tag. Hard at times, I still had my mind on getting a trophy mule deer on public land.

After not succeeding the first two weeks during archery season with mule deer, I would direct my time to elk, and go on to harvesting a bull and cow with my bow. My brother, who is active duty military, took vacation to come along and got to experience his first ever “pack out”. I even harvested a freak antelope with my rifle in September, which would find itself as a future wall decoration in my home.

As October and rifle season approached for mule deer, I began to wonder if I was going to fulfill my goal of a “trophy buck”. Although my season had already been a blessing and successful.

Entering rifle season, and heading out for the Wyoming gun opener with a good friend that has killed many trophy deer, and even been in Eastmans’ Hunting Journal himself, I found myself passing up a 165” to 170” buck. Which was influenced primarily by him, as I had my safety off and waiting for the “go ahead to shoot.” I heard him say, “we will find a bigger one.” Even after telling him that the buck would possibly be my biggest to date.  I was unsure of my decision after several hunts went by, with only seeing small bucks.

I continued to hunt every chance I got through the first week of October, seeing lots of bucks, but not what I was looking for. At times I was tired, frustrated, and beginning to worry that I was not going to achieve my goal. Even my wife had to remind me of what was most important, because I was putting so much pressure on myself to get a big buck. I had to regather my thoughts and count my blessings; public land, health, tradition, and that I was fortunate enough to pursue this addiction and passion I have for hunting.

On October 10th I joined another good buddy for a morning hunt, which was possibly my last chance at a buck for my season. The weather had changed; cold and blizzard like conditions. We were hunting an area that I hunted at least twenty times throughout archery season. So my hopes were not that high, being rifle season had probably taken its toll on the area, and only seeing one shooter buck in September during archery season.

After deciding who would get to take a shot first if a big buck was located, we began to glass and search the area for deer. At around 7:30 A.M we located a really good deer, and my buddy was able to connect on a main frame 3×3 with lots of trash. I was ecstatic for him, he was as well, because the “bragging began”. I was almost certain that we would not locate another trophy buck, I mean what were the odds?

About an hour later, my buddy and I began to search the area again, by picking apart every inch of the area with our binoculars. I can even remember my buddy making the statement “we just need to glass more”. In fact it was only a few minutes later when he yelled, “shooter”.

After glassing the bedded deer myself for a few seconds, I knew it was a mature buck. All I could see were the buck’s antlers sticking out of the sage brush, and his body covered in snow. I closed the distance between us, and he stood up. I could remember thinking to myself, he’s going to run.

My buddy gave me a range of 361 yards, I aimed my rifle and experienced every rifle hunter’s most dreaded moment. My scope had fogged up. I took my lens cloth off my bino harness, and hurriedly wiped my scope. I anchored my rifle again, and shot. Shooting high and missing my first shot, the buck began to run to the left, where he stopped for a brief moment at around the same range. I can remember putting my 350 yard anchor point on the deer, and squeezing the trigger. Surprisingly, I heard my buddy say you “got him”.

In disbelief, I asked several times, “are you sure?”

After my buddy reassured me I hit the buck, he said, I “saw him drop”. Not knowing if the shot was fatal or not, my buddy stayed at the location where I shot, and continued to glass the area in case the buck got up and took off.

As I began my approach towards the area where I last thought I shot at the buck, my buddy had to flare his arms to get me headed back in the right direction of the buck. I wasn’t far off from where I last shot at the buck, but I was too focused on the buck getting back up and running off. I began to glance around, and approximately 50 yards from me I saw the buck on the ground and his antlers moving around. Unsure if my shot was fatal, I fired another round. The buck expired completely, I then made my approach to him.

As I approached the buck, the first thing I noticed was the mature size of his body. Once I was able to get the antlers in sight, I was in shock. I knew this buck was a mature deer, but truly didn’t know he was as big as he was. This buck had chocolate colored antlers and was massive!

I grabbed the antlers with both hands, and as tough as I would like to think I am, I cried like a baby. All my emotions hit me at once, knowing that I just harvested a once in a lifetime buck. I was so humbled, I couldn’t believe what just happened. I began to think about how much time, effort, and persistence I put into this hunting season. Not to mention putting friends, family and all other events in my life on hold, to pursue this passion of mine. After I said a quick prayer, as I do for any animal I harvest. I yelled to my buddy, Big Buck Down!