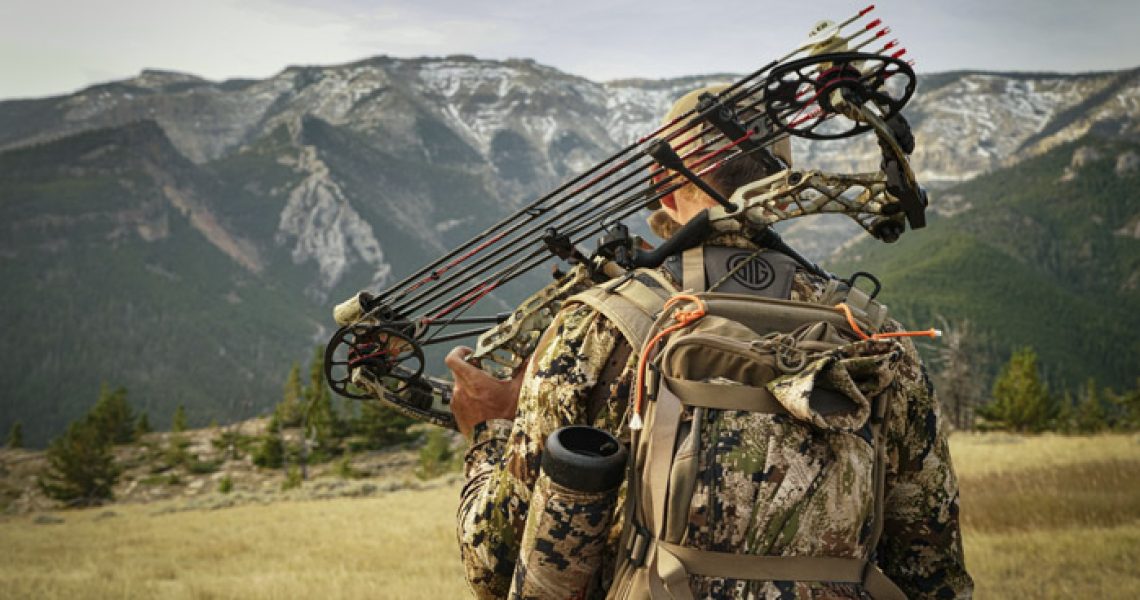 At this point in the year, if you are a western bowhunter, it means that you are just about done with most bowhunting opportunities and thinking about next year’s draw. It’s part of celebrating the success this year and, of course, licking the wounds of a tough season if notching tags wasn’t in the cards in your camp. In both cases, there isn’t much that drives a bowhunter’s imagination like deciding which states and hunts to put your hat in the application ring for. The allure of what if I draw this tag fills the imagination of every Eastmans’ TagHub member and takes the MRS to the next level of research, helping you find the hunt that fits your needs best. So, let’s dive in!

The most powerful tool inside of Eastmans’ TagHub is the primary filter, which can be used to sort every antlered hunt in the West, and we may have some antlerless cow/calf hunts coming in the near future to a few states. The primary filter makes it easy to look at what each state has to offer and then sort by weapon. Because this is EBJ, we are going to look at some of the archery hunting opportunities out there and hopefully help you use TagHub features to find the hunt that is right for you.

The first question, then, is are you exclusively a bowhunter? If you are one of the hardcore bowhunters who has committed to going after bucks and bulls with a bow and a bow only, then it has never been easier to research these hunts. Inside of TagHub, we have built a system that filters results based on each state’s unique draw system. To put it simply, choose your weapon in the primary filter, and the hunts desired will light up across the screen.

Now, a few details about the archery-only hunts that every bowhunter should be aware of. As a general rule, the opportunities that are exclusively for the archery hunter have better odds and in states with flat preference points, generally require fewer points to draw. Even with the rise in popularity of western archery hunting, there are still fewer hunters chasing those coveted tags. Which brings me to my next general rule: Make sure you know that success odds will be lower on these hunts than they are in the multi-season or firearm-exclusive hunts.

Let’s break this down by a few of the best opportunities out there exclusively for the bowhunter.

Wyoming Type 9 Elk tags: My home state of Wyoming has offered these tags for quite a while now, and they are a great option for getting the entire month of September to hunt rutting bulls in some of the best areas of the state. As always, though, the devil is in the details. Many of these tags simply offer two weeks of exclusivity for the type 9 tag holders at the beginning of September. Then September 15th happens, and all of the Type 1 archery elk hunters en masse will join you on the hunt for a big bull! The wise archer will either apply for the hunts that don’t have the option for type 1 hunters to join the fray or will work very hard to get it done before the 15th.

To find all the type 9 options, simply select “Type 9” in the primary filter after you have selected elk and voila! All of the type 9 options will be available for you to look at and then use the table filters to remove the options that you don’t have enough points for. 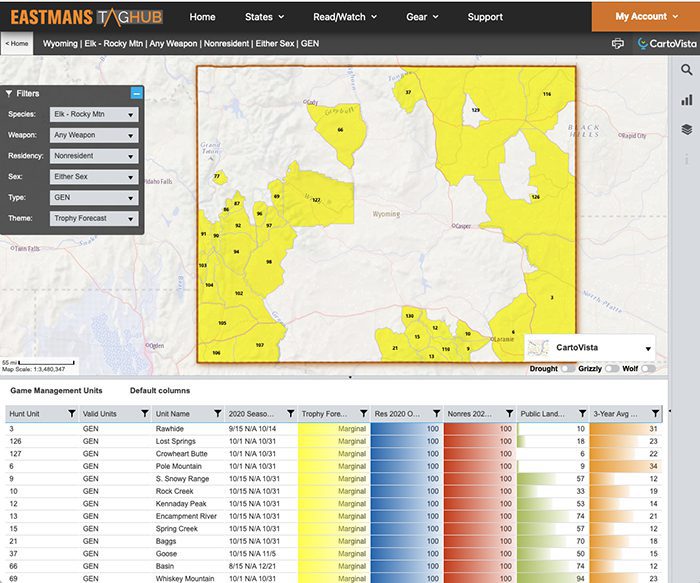 Colorado Over-the-counter Elk Tags (OTC): Colorado is one of the few states that still has OTC archery elk tags. With TagHub, you can set the primary filter to display all of the OTC archery elk tags that are available and from there, change the theme to show pressure. This little tool will be very handy in understanding where the heaviest pressure will be, and if you want to avoid it, hunt somewhere else. The entire map of Colorado will change from the familiar chip ratings to look very similar to the heat maps you see in the magazine. The darker the red, the worse the pressure is.

The following are considerations when applying for an archery hunt with overlapping muzzleloader dates.

I for one would not apply for an archery hunt with overlapping muzzleloader or antlerless firearm seasons. One of the things I enjoy most about bowhunting is the solitude and quiet of the landscape. If those things were stripped away for the sake of a bigger buck or bull, then I wouldn’t be interested. But hey, that’s the great thing about choice—it’s up to you, and TagHub helps you make the most informed choice possible when looking for next year’s bowhunts.

Now, let’s move on to the hunters who don’t exclusively hunt with a bow and are looking to have multiple seasons to hunt.

Wyoming General Elk: Most of Wyoming’s general elk hunts offer the full month of September to put a bull on the ground. The one exception is a few of the areas that offer the type 9 tags. At the current pace for non-resident hunters, there is about a three-year gap between general elk hunts. If archery elk hunting continues to grow in popularity, that gap could be stretched out even further, thanks to point creep. If you are sitting on the low end of the point structure, get your hunts in now, and hope that the new normal doesn’t push you out too far on the next hunt.

One thing to consider if you look into the western half of the state for your general elk hunt is the mule deer hunting orange army that might invade your basin full of bugling bulls around September 15th. If you plan to archery hunt over the first week of the general deer season, be cautious, as there will be plenty of rifle hunters in the field. Don’t get too irritated though; you have the opportunity to come back later in the season and put a bull on the ground with a rifle. 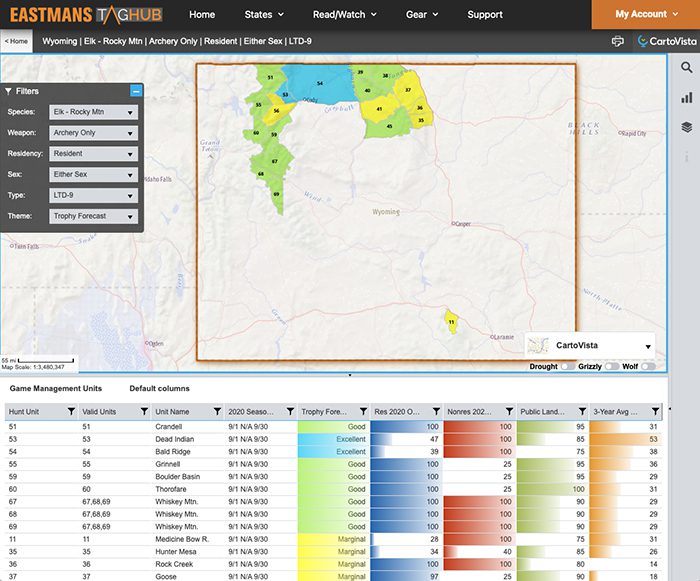 Montana Elk: Let’s be honest here: If you are an archery elk hunter and you aren’t applying in Montana, you are living under a rock. Montana has been a staple for western hunters for years, and with the craziness in application numbers now for two straight years, this state is definitely where MANY western hunters are throwing their hat in. Montana, like Wyoming, offers multiple seasons where it is possible to hunt with your bow and then come back with a rifle if unsuccessful. That being said, the best possible strategy for using Eastmans’ TagHub is to look through the pressure themes and then build plans based on those numbers to decide when and where you plan to hunt.

The next piece of TagHub that is worth looking at in relation to archery hunting Montana elk is the public land percentage theme. So many people struggle with the idea that because it is Montana, it should mean that there is public land everywhere. That would be a giant NOPE. The vast majority of the public land in Montana is in the farthest western third, and even some of that land is tough to access. Use the public land theme in the primary filter, and it becomes evident which units you need to hone in your map scouting on.

As I am sure you are aware, there are many more hunts and many other states available; these are just a few of the options that Eastmans’ TagHub can help you sort through. The best part is that through the application season, we have several people here on staff who will be here to help with any and all questions you may have. We will help you find the hunt you are looking for as a TagHub member. Give us a call or shoot us an email; either way, that’s the Eastmans’ difference.

PrevPreviousEarn A Lifetime Bonus Point In Arizona!
NextA Day To RememberNext
Back to Blog

Forgot your password? Reset it now.
To become a member, purchase a TagHub membership!