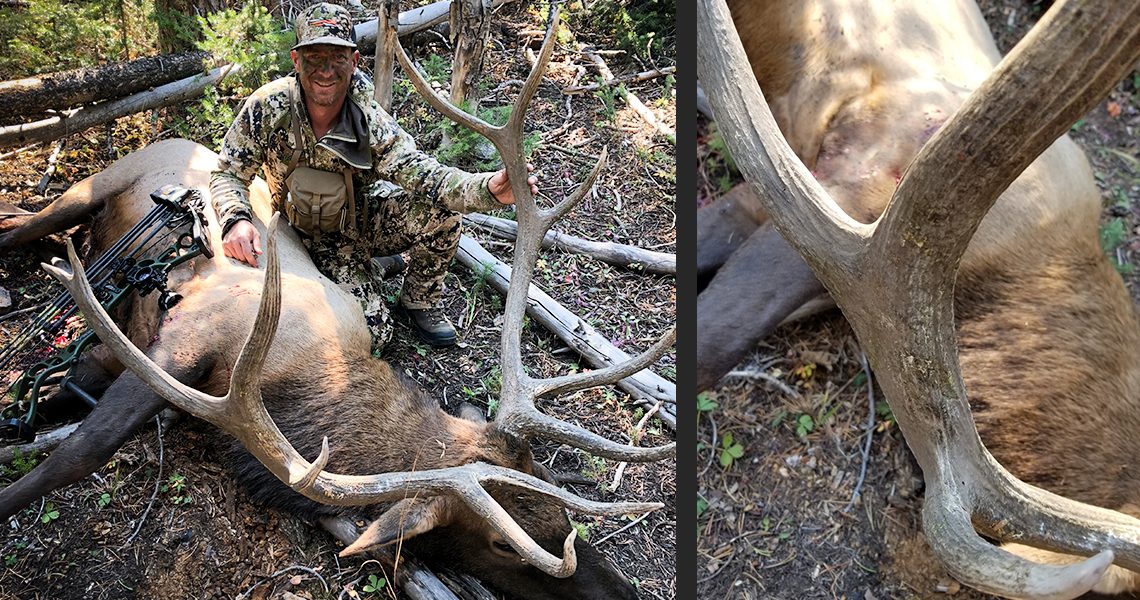 As I walked down the dusty road a huge smile came across my sweaty face. I was tired, my shoulders were sore, and I had a mile and a half before I would get to camp where I could get a truck to go back and retrieve our heavy packs laying in the shade by the road. I had plenty of time to reminisce about the last few weeks, and especially about the events that day.

With Utah’s archery hunt starting in mid-August it’s futile to run around chasing the elk with a bugle in hand. The first few weeks were spent setting water, and wallows hoping a bull would come into drink or take a dip to cool off. One morning I had a cow come into the water followed by a 4-point bull. I had the bull at 14 yards or less for more than 5 minutes, but I couldn’t get a shot due to a log in the way. The cow finally noticed me and blew up taking him with her. The days went by and I hadn’t had any other elk visit my ambush sites. I was just happy to be out in God’s country with bow in hand.

I was excited for the last week of the hunt, anticipating the bulls would start to rut, and that maybe the high mountain basins would be filled with bugles.

I pulled into camp on September 7th, knowing I was here till the end of the hunt, or I killed a bull. After camp was set up I had about an hour before dark and decided to go for a quick ride and see if I could hear any bugles. No bugles were heard so I headed back to camp. When I turned into camp I was happy to see good friend Adam and his wife Vicki had camped next to me, as the last few years I’ve been solo.

The next morning, we headed up the hill and to our dismay a camp of 10 hunters had camped close to where we were planning to hunt. After the morning hunt we realized the pressure had pushed all the elk out of the area.

That night we sat down, pulled out our phones and started to scour OnXmaps. Adam had a spot he had looked at and suggested we try there in the morning.

We were joined the next morning by Adams friend Ryan. All four of us piled into my ranger and headed towards new country in the dark. Following OnX Adam was leading us to a big meadow we were hoping would have elk still lingering in the pre-dawn darkness. Just before we got there we cow called and threw out a bugle. There was no answer. All at once we could hear crashing to the side of us as an elk materialized on the hill. I whispered bull! bull! bull! We all hit our knees and started to knock arrows. He had seen the movement but didn’t know what we were. We threw a few cow calls out, and here he came on a dead run. As soon as he disappeared in a small gully I came to full draw. At ten yards he appeared to my right and stopped. I touched off the release and watched my arrow bury into a tree 5 feet in front of me! I had pulled my release away from my face and shanked my shot! I started to frantically cow call stopping the bull for Adam, upon his release I saw tree branches and pieces of arrow fly all over. The small 5 point ran off unscathed and all four of us were left standing there laughing, staring at my arrow a mere 5ft away stuck in the tree.

The next few days were pretty uneventful, we had a few bulls start to answer our calls but were reluctant to come in, and with more hunters starting to move in we knew we were going to have to go in deeper than everyone else to find the elk.

Thursday morning, we headed into an area we had heard a bull bugle the day before. At first light I found a feather, picked it up, and told Vicki, this is my good luck feather and stuck it in my hat. The further we went the better the sign got. The ground was tattooed with elk tracks, and we were starting to see trees that had been demolished all over. Adam let out a bugle and immediately a bull bugled back. Our faces lit up with smiles and we spread out looking for shooting lanes. After a few challenges back and forth the bull drifted off and all went silent.

We decided to circle back and drop down the drainage a ways. Every so often we would let out a bugle just trying to get a response from a bedded bull as it was now 11am. After a few attempts we finally heard what we had been waiting for. A bull moaned back, and we started to tiptoe in his direction. Just as we figured we were getting close all hell broke loose, cows blew up 15 yards away and headed to the left. I hadn’t seen the bull but when he bugled to see where his ladies were he had gone to the right, perfect! I turned around and cow called behind me and immediately screamed a challenge right at the bull, he was not happy this bull had gotten between him and his cows. The bull screamed back and started to demolish a tree. I still hadn’t seen the bull, Adam could see him but couldn’t get a clear shot. I cow called behind me and challenged him again. He screamed back and started my way. I drew my bow as soon as I saw movement, the bull stepped through a shooting lane but there were branches covering his vitals. I only had one more shooting lane before he would be gone. As he stepped into the 2-foot lane I cow called, he stopped, and the arrow was on its way. My arrow hit lower than I wanted but had done its job. He didn’t make it very far, and we watched him tip over! While giving the bull a minute we talked and relived what had just happened. I was excited to see this bull, I knew he was good, but hadn’t gotten a good look at him in the short amount of time before releasing my arrow. Walking up to this bull I was elated, he’s not my biggest bull, but he’s the best bull I’ve killed on a public land over the counter general tag. As I looked up from the bull to see Adam and Vicki standing there smiling, I couldn’t hold back the tears as I was so grateful for the great friends I had there to share this with me, this was our bull, we had done this together. We shared in the chores of breaking the bull down and just as we started to load up our packs Vicki pointed at my hat and said the feather was good luck. I had forgot it was there. I pulled it out and handed it to her and told her now it’s your turn. When the last load of antlers and meat was dropped at the dirt road I was even more grateful for them being there. Hunting to me isn’t just about the kill, it’s about the country we get to see, and the friendships we share. Antlers on the pack are just a bonus!