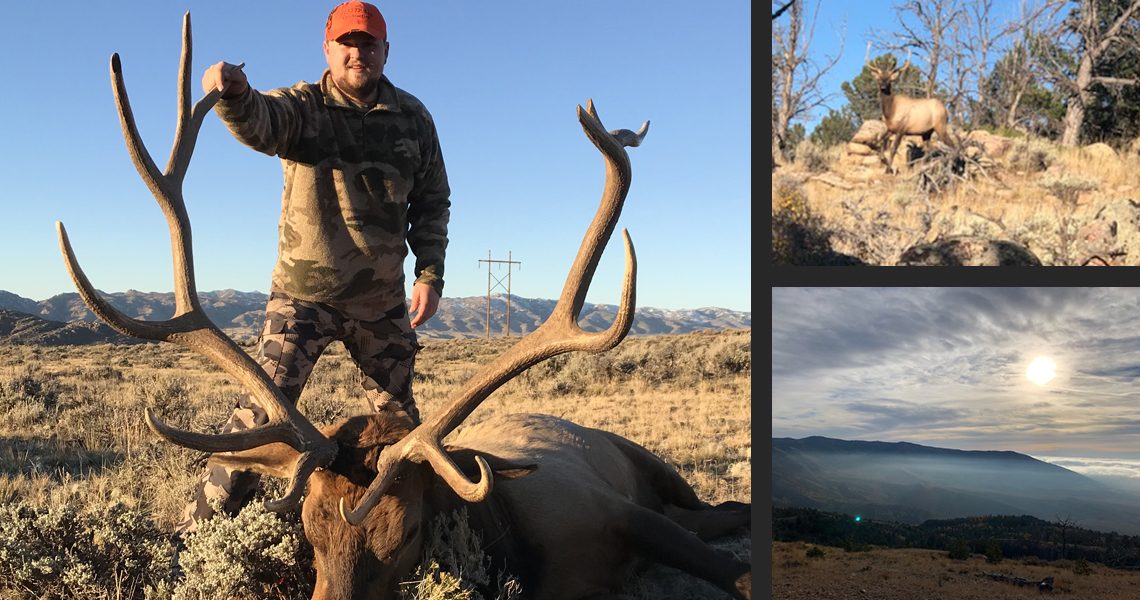 The morning of Thursday, June 21st was no different from any other Thursday morning at work, except that the long awaited Wyoming big game draw results were coming out. Going into it, I knew full well that all of the areas I had applied for left me with minimal chances of success in the draw. So as patiently as I could bear, I waited for the clock to strike 10AM. When the time came, I checked everyone else’s results before mine, because I knew I would either be jumping for joy or else saddened by what I found. I saw that my brother had drawn the elk tag we both sent in for. With excitement since no matter what, I would have the opportunity to elk hunt my favorite area in the fall, it was time to check mine. I had to do a double take when I read ‘Resident Elk — Successful.’ Finally, I had drawn the tag.

In the following days, I anxiously began to go over maps and try to mark all the areas I felt that we needed to spend time watching during pre-season scouting. On the first trip, it was very warm. We spent many hours just glassing down valleys and tree-filled ravines, trying to locate bedded elk. We went out several times throughout the summer, just watching bulls and getting a feel for what was going to be around for the coming season. However, there was one scouting trip that stood out from the rest. Evening was approaching, and I had decided that we should go over to my favorite drainage. As soon as we got there, I noticed two elk about 1400 yards away, in the bottom of the north-running part of the creek. So I opened my binocular harness and lifted my binos. In the bottom were two extremely large bulls – but there was something about one that made him stand out. So I dug my spotting scope and tripod out and set it up in the rocks below me. As soon as I got it into focus, I knew I was looking at something special. I said to myself “That’s my bull.” From that moment on, I decided that would be the elk I would chase until the very end.

The week before archery season would open on September 1st, we set up our camp. Then it was a painfully slow waiting game. For the entire week leading up to opening day, I had every emotion, thought, and scenario running through my mind about what would happen.

Finally, the first morning came, and I had what I thought was the perfect plan. And wow was I wrong. It was an abnormally hot day, so the elk weren’t doing anything that I was used to them doing during archery season. I set out to the adjacent drainage where we had spotted those two big bulls, because I knew once hunting pressure began, these elk typically started to work their way over into the steeper parts of the area. People very rarely try to go in that far or hunt into the steep terrain. But with the image of the giant in my head, I didn’t care how hard it was going to be. Once we got to where we were headed, I let out some calls to see if we could locate anything. Nothing answered. I tried again and received no answer. I looked back at my 16 year old brother and wife and explained that I wasn’t really sure what to think, but that I felt like we should press on. So we did. As we drew up on a thicker timbered draw, I decided to call again. Just as I had previously expected, a bugle rang back at us. The hunt was on. We began to close the gap in the direction of the bugle while periodically calling back and forth with the bull. We were never able to get him to expose himself, and eventually, he had enough of us.

This same thing went on for the weeks to follow. With many close encounters with mature bulls, it seemed like we almost sealed the deal several times, but something always happened. We also passed on several good bulls, but they just were not what we had been chasing, and we had both decided very early on that we weren’t going to settle for just any bull – especially not during the archery season.

After 4 weeks of bowhunting, we were both still empty-handed. But we still had a trick up our sleeves. This year, September had 5 weekends, and the rifle season opened the morning after bow season closed. So for the last weekend of bow season, we loaded everything up in order to stay and hunt with rifles, as well. We were convinced that we would be able to find a bull the last day of archery and then track him down the next morning when we headed to the mountains.

When we started climbing up the long road towards camp, we noticed a significant number of camps had moved in for the coming rifle season. Still confident in our plan, we trudged on. Upon waking up, we went to a spot where we had previously run into some very decent bulls and began to call. Nothing. So we started glassing. After about an hour, I finally turned up a lone elk a couple miles away, so we decided to go check him out. Once we got within about 900 yards from him, it was obvious we had found a big bull. But after a failed stalk attempt, we lost him.

As the weekend went on, it was obvious that something had changed. The elk were not where they had been, and there was a significant increase in four wheeler traffic all across the mountain.

A little discouraged, we picked up our rifles for opening day. After a long day of no luck, we finally found a nice 5×5 bull across small canyon with a few cows. My brother, Travis, decided that it was the bull that he wanted for the year. Once the bull was down, the work began, as we field dressed and quartered the elk and packed it out. After arriving back to camp at about 1AM, we loaded our gear and his bull and headed to town. I had to work in a couple hours and it would be another week before I would be able to hunt again.

Unfortunately, some weather set in and I decided it would be best to get the tent down from the mountain before it got any worse. So again, no hunt for myself. The next week became a little hectic, as I was preparing to go snow goose hunting in Saskatchewan. Two days before I left, I was told that someone had, in fact, killed the bull I had been chasing. The whole week goose hunting, I was down and feeling like I may not end up with a big bull after all the time I had invested. But I told myself to have a better attitude and just hunt hard until the end.

Finally, the morning of October 20th came, the day I got to go back out to search for a big bull. Well before the sun was up, I was on my way to the mountain. I left town a little later than usual because I knew that this time of year, some of the elk would be starting to head down to the foothills, and I didn’t want to miss an opportunity by simply going past one in the dark. Just as I began to approach the foothills of the mountain, it was starting to become daylight.

I decided to pull over into a draw where I had previously seen some nice mule deer hanging around since the general season was open. Once I jumped back into the pickup, I began to glass around to see if I could see any deer working up towards their beds for the day. All of a sudden, the frame of a bull elk began to fill my binoculars out in the distance. I almost had to do a double take because I wasn’t even expecting to see any elk. They were five young bulls, so I decided to pass. Just as I was about to turn around to get back on my journey towards where I was headed, I noticed three more elk coming up the draw. As soon as I lifted my binoculars on the lead bull, my heart began to race. That looked like a bull I intended to tag this season. Quickly, I gathered what I thought I would need, and took off on a jog towards the elk.

When I got within about 400 yards, my jog turned into a crouched walk to stay behind the cover of a sagebrush hill I had been keeping between us. At about 200 yards, I noticed one of the smaller bulls in the back was looking right at me. I stopped and ranged how far he was – 246 yards. Then he broke into a trot, so I decided to stand and try to put eyes on the big bull. As I rose, I saw that he and the two others were in a trot straight in front of me. So I raised my rifle and settled in for the shot. Bang, a clean miss, but I knew what I needed to do. So I adjusted for the second and sent it home. The big bull lurched to a stop and was staggering, so I ran the bolt again and sent one more, and he dropped. I finally had my bull.