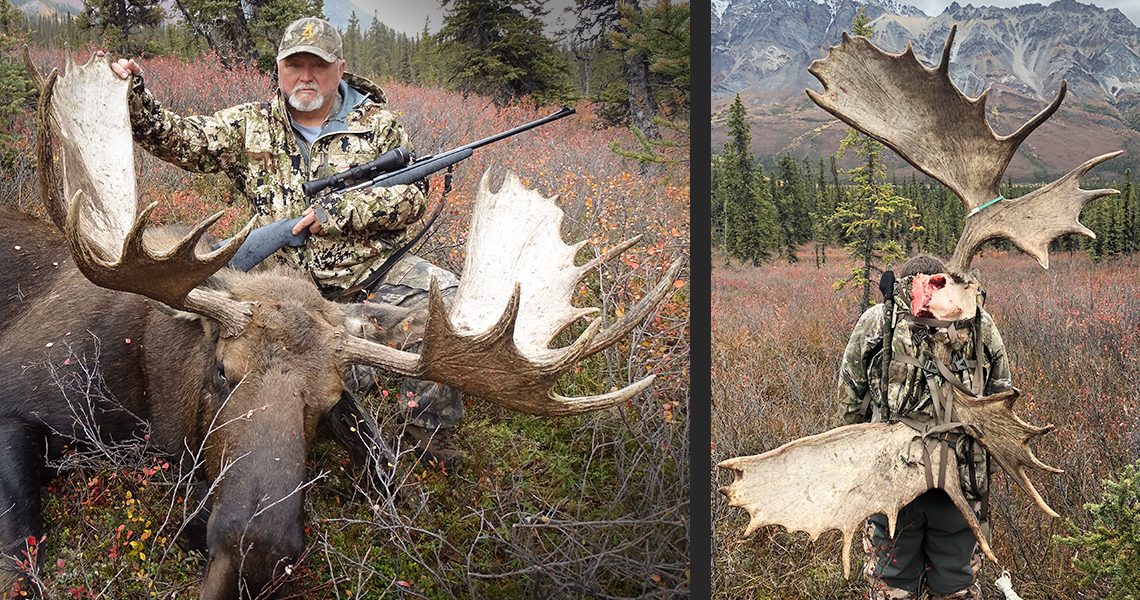 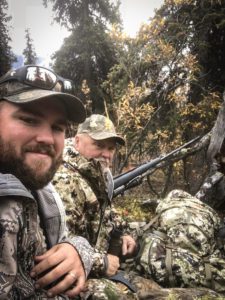 Our story starts on Watts Bar Lake in 2014 while crappie fishing following our first Colorado elk hunt. While reminiscing on the recent hunt, I asked Dad now that he had killed an elk. What would be one hunt he would love to do? His reply was “I’ve always wanted to kill a moose.”

I immediately began searching for a moose hunt. During my research, my good buddy David told me about Bob at Top Gun Treks and how well his group’s moose hunt had gone when they hunted with Bob. The next day I called Bob about a hunt. I talked it over with my wife, and with her support, I called Bob back and told him we would like to book with him. He was booked until 2018; now, sitting at home after getting back from our hunt with him, it is easy to see why he stays booked! I called Dad and told him we were booked and heading to Alaska for moose. It was a bucket-list hunt for both of us, that until now, we only had dreamed of.

Fast forward four years, and the day before we leave on our 4000-plus mile drive, we are packing trailer bearings and checking over gear to ensure we have all we need for our 10-day hunt on the Alaska Range. The next morning my Dad, my buddy Danny, and I loaded up for a drive most would never imagine embarking on . Although a 70-hour drive sounds miserable to most, the scenery made the drive worth every minute. Four days after we left Tennessee, we arrived at the air strip where we met Bob. We talked with Bob and decided, on his recommendation, that we would fly in a couple days early to beat the weather that was coming. This decision turned out to be integral to Dad harvesting his moose. After a sleepless night packing and running back to pick up our last member of the party from his red-eye flight, we were on the air strip with our gear separated into four small piles for each of our flights into camp. I was first, as I had never been on an airplane before, and I just wanted to get in and go. 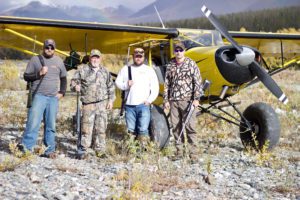 I was dropped off at our scenic camp, overlooking a beautiful river nestled in some truly amazing mountains. I had taken my first load of gear up the river bank to the tent and was aimlessly walking back to get the rest of the gear laying on the gravel bar when something caught my eye. Coming across the mountain opposite of our camp was a huge bull moose. I hadn’t been there five minutes. As you are not allowed to shoot an animal on the same day you fly in Alaska, all I could do was admire him through my binoculars as he went on his way in search of a hot cow. As I retrieved the rest of my portion of our gear and headed back to camp, I spotted another bull going across the mountain to our north. Dad was on the second flight, and I couldn’t wait to tell him about these two bulls. When he arrived, we began working on a place to keep dry and build a fire. As each person arrived, we continued camp setup and the chores associated with making our home for the next 10 days.

The day four years in the making came early. It also brought with it a thick frost that covered everything in sight. For the next two days, Connor, Danny, and I spent the days calling in small bulls and learning the lay of the land while Dad watched the mountain side in front of camp. After calling in several small bulls, I convinced Dad to follow me up the mountain to get the experience of calling these amazing animals. Day three, which was our original fly-in date, started off the same as the previous two. We loaded up our packs with snacks for lunch, along with a couple bottles of water, and headed up the mountain to the area that Connor and I found the previous day. It was littered with fresh rubs and scrapes. We slowly made our way through the thousands of ripe blueberries, stopping and calling without response. We made it to the tree line around the base of the mountain just after noon. We decided to eat our lunch, supplemented by all the blueberries that were in our immediate reach. As we ate, in relative silence, taking in the scenery and listening for any sounds of a moose, Dad leaned over and said, “This hunting up in these mountains is a young man’s sport.”

I just replied, “Don’t give up on me yet. We’ve still got a lot of daylight left, and a lot of ground between us and camp.”

I checked my phone, and we were just shy of four miles from camp. While four miles doesn’t sound like much, the Alaskan ground gives like a sponge on every step, and at least half of that is having to rip your legs through the tangled thick blueberry bushes and scrub brush going uphill. This combination has your hips searing and your legs feeling more like you have just completed a Crossfit workout than you are hunting. I silently sent up a prayer as we were wrapping up our lunch. I just said, “God, I know there are bigger problems in this world and this may be a silly request, but if it’s at all possible just send us a legal bull. He has earned it.”

From our high vantage point I could see one large meadow right in the middle of all the spruce timber off to itself. I told Dad we should make our way off the mountain to that meadow and hunt there for the afternoon. On the descent to the meadow, we stumbled onto a big shed. While the extra weight wasn’t desirable, the allure of having a big moose shed to take home was more than I could take. I strapped the shed to my pack, and we continued on our way. As we made our way into the meadow that we had set our sights on from a distance, the signs of rutting bull moose became more and more evident. We made our way to where the meadow rolled off to the lower ground of the mountain, so we could see down and back up to the tree line. Taking off our packs and sitting down for a drink of water was a welcome break for us. I made several series of calls with no response. After about an hour, Dad suggested we head back towards camp. It was just after 3:30, but with the looming clouds it appeared later. I said, “No. We’ve got time.”

After a few more calling sequences, we were sitting in silence, once again, both thinking of who knows what when I heard an unmistakable sound. There was a bull raking a tree, and he was close!

He stood up first then I got to my feet. I made a few cow calls and the bull stopped. I unbuckled the shed I had found on the way off the mountain. I began raking the little spruce we were behind, along with making cow and bull calls. Nothing. After several minutes of dead silence, we concluded that maybe it was a small bull and raking the shed may have run him off. We sat back down.

Now, on the downswing off the shot of adrenaline we had just received, once again we sat in silence. It was a matter of minutes I’m sure, but it felt like an hour, and I heard antlers again. This time I could tell it was limbs raking bone as he was moving through the brush. I said, “It’s him, and he’s close!”

Dad slowly stood up behind our small spruce. I heard, “I see him,” as I was slowly standing behind Dad. He was looking through his scope, and from over his left shoulder, I got my first look at the bull as well. He was behind a large spruce, but through my binoculars, I could tell that his right side laid out. I whispered, “He’s got to be legal, Dad, but wait on me.”

I made a couple soft cow calls, and the bull started to waddle out from behind the spruce that had him covered. The first thing I saw when he started to clear the tips of the spruce limbs were his massive palmated browtines. I said, “Four. He’s legal, Dad. Kill him!” 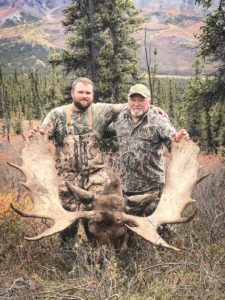 Quartering to us, he stopped just as his chest cleared. Peering through my binoculars, I was fixed on his chest waiting for the .300 to make our presence known. It seemed as if it was 30 minutes waiting for the gun to go off. The impact of the 180 grain bullet beat the crack of the gun. It sent a spray of wat

er off the bull just to our left of the curl on his chest. Without thinking I said, “Hit him again! Hit him again!”

The bull turned down the mountain. This was our first look at this massive beast. It seemed as if he wasn’t going to stop coming out from behind the spruce that had been keeping him partially concealed from us. Just as Dad got another shell chambered, the bull stopped. I noticed his back end starting to sag, and just before the second shot rang out, the bull was already on his way to the ground. We celebrated like it was the first animal we had ever killed! We were elated. The 65 yards to the downed bull were made in short order. When Dad had the moose at his feet, he was speechless. We both were. This was the most massive and amazing animal we had ever seen. We weren’t prepared for the sheer size of this moose when we got to him. Once the shock and awe of this amazing animal began to pass, the first thing Dad said was, “We’ve come a long way from an old run-down house in Oxford, Mississippi to this.” 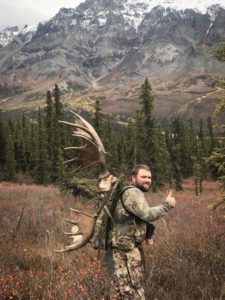 This was in reference to my first deer. I just said, “Yeah I’d say so.” We shook hands on a job well done and got out the camera. We will be hard pressed to ever top this hunt. It truly was the hunt of a lifetime.