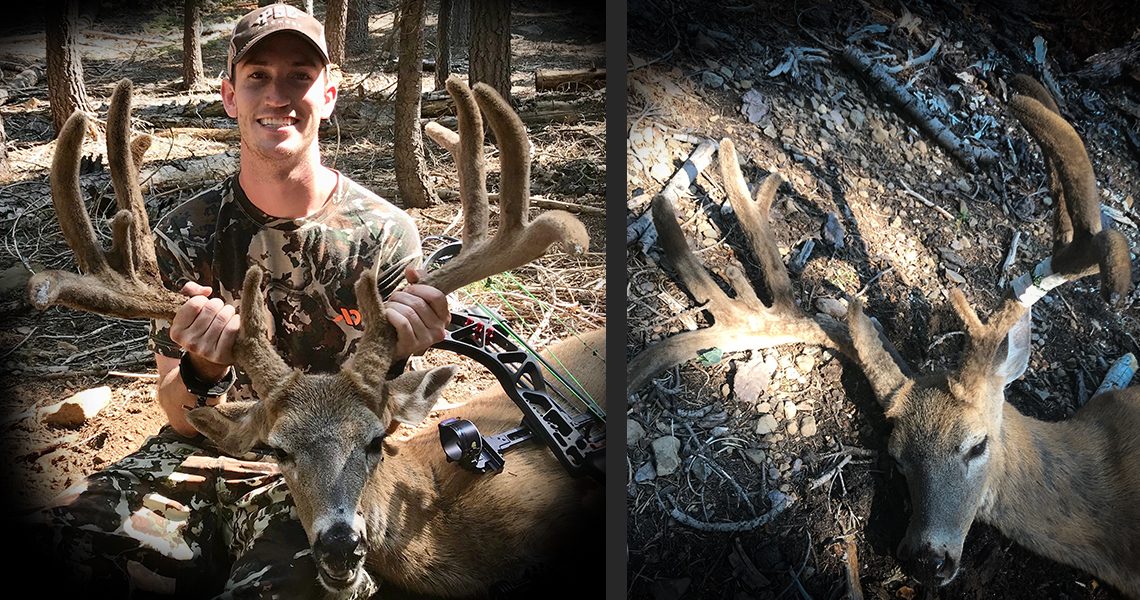 Friday, the day before the season opener my hunting partner Noah and I joked while driving to hunting camp that one of us would either harvest the king of the mountain or his son that just came of age, a forky. We both laughed but in reality both knew the severity of that situation and possibility of that happening. We had made multiple scouting trips to this area, and knew the area held deer with good genetics. However, we both wanted to put meat in our freezer, and being picky on this trip wasn’t necessarily on my mind. I was after my first deer, any legal deer. I knew we were hunting public land only, therefore the possibility of deer feeling the pressure of fellow hunters was prevalent as well as crossing paths with other hunters in the area.

We got our tents pitched, camp set up, and shot a few arrows to ensure our marks were still good one last time. The eager anticipation of opening morning made for a restless night and as the morning came; both Noah and I were up early. For some reason the coffee was slow to brew but we got past it and were en route to our first location before first light.

We got into the location where we had seen some nice bucks during our scouting trips, and were ready to let an arrow fly if a buck presented himself. After a few hours of sitting, glassing, and waiting, we saw a whole lot of nothing except rowdy squirrels getting after it. At this point we decide to split up and meet back at the rendezvous point. Noah went one way as I did the other still-hunting my way up a ridge until I could get to a vantage point and glass some more. Nearing the end of a draw, I spooked up the king of the mountain’s son, “forky”, out of his morning bed. The young guy he was, just popped up, took a few steps, and looked at me broadside. He stood there looking at me long enough for me to range him, set my pin, double check and make sure he was legal, and draw back on him. Looking at him through my peep, I still don’t quite understand what happened, I just let down. I was at a decent yardage and everything lined up to be proper, yet I let down and watched him hop on away through some pines. Baffled, I couldn’t believe myself as I hiked out of that area to meet back up with Noah. The “what if’s” fluttered through my mind not knowing if I would get another chance, and with that we saw nothing but does the rest of the day.

The next morning Noah and I hiked into a watering hole before first light, and to our dismay we saw nothing but squirrels yapping at each other the entire time we sat the water. After drawing back on a forky opening morning, and subconsciously letting down, the doubts grew more and more.

It was hot, and nothing was moving so we opted to get out of this area, and head back to camp. The game plan was fairly simple; eat a bologna sandwich, drink a Gatorade or Coke, grab a Rice Krispies treat, and get back out there while it’s hot and the deer are bedded. I had this good weird feeling an arrow might fly for one of us, and Noah grabbed a few extra fruit roll-ups in case it was going to be a long afternoon packing meat. What a guy.

As we left camp from lunch, we opted to test our luck and skill on the opposite side of the mountain. This particular side of the mountain we did not scout prior to this trip, but I am thankful for onX Hunt because we found what appeared to be an old logging road leading to a clear-cut. This beat up, pine trees grown in the middle of the road, path led us to the opposite side of the mountain that we were initially hunting. Noah and I both thought we would be able to conquer the steep terrain and climb up through the dead fall without making much noise or spooking off any deer. This wasn’t the case as we stood at the bottom of the clear-cut realizing that climbing to the top wouldn’t be beneficial for either of us, therefore we made a discouraged walk back to the truck once again.

We got back to the truck and I wisely chose to keep my bow in my lap. As we drove on this logging road back to the initial point of hunting we rounded a bend I saw him and quietly freaked out, “BIG BUCK, BIG BUCK, BIG FREAKING BUCK!!!! Keep going, don’t stop. Go, go, go.” After we had driven a few hundred yards, Noah left the truck running and I hopped out.

I knew the big buck was a couple hundred yards back bedded on the hill. Luckily, I had a dirt embankment with a few scrub bushes here and there that provided me with some cover as I stalked back towards the buck. The buck was bedded next to a fallen log under a desolate pine tree in the midst of this hot August afternoon. My technique, army crawl/bear crawl, played out to be effective, but the wind was horrible as I was moving in, blowing directly at him. I felt that if I could get to the set up spot, and he was still bedded, I could get a range on him and make it happen.

As I got into position to range him, he was already staring me down. He laid in the shade still as could be, giving me time to range him. As soon as I got my pin set, I hooked my release, stood up and drew. I recall telling myself to take a deep breath, align my bubble, and execute the shot. I let the arrow fly, and watched it penetrate the buck where it needed to. It struck him great, and as I watched him run no more than 60 yards, he got wobbly and went down. Walking up on my first deer was something I couldn’t put into words, and the buck being a 5×4 with eye guards is a dream come true.